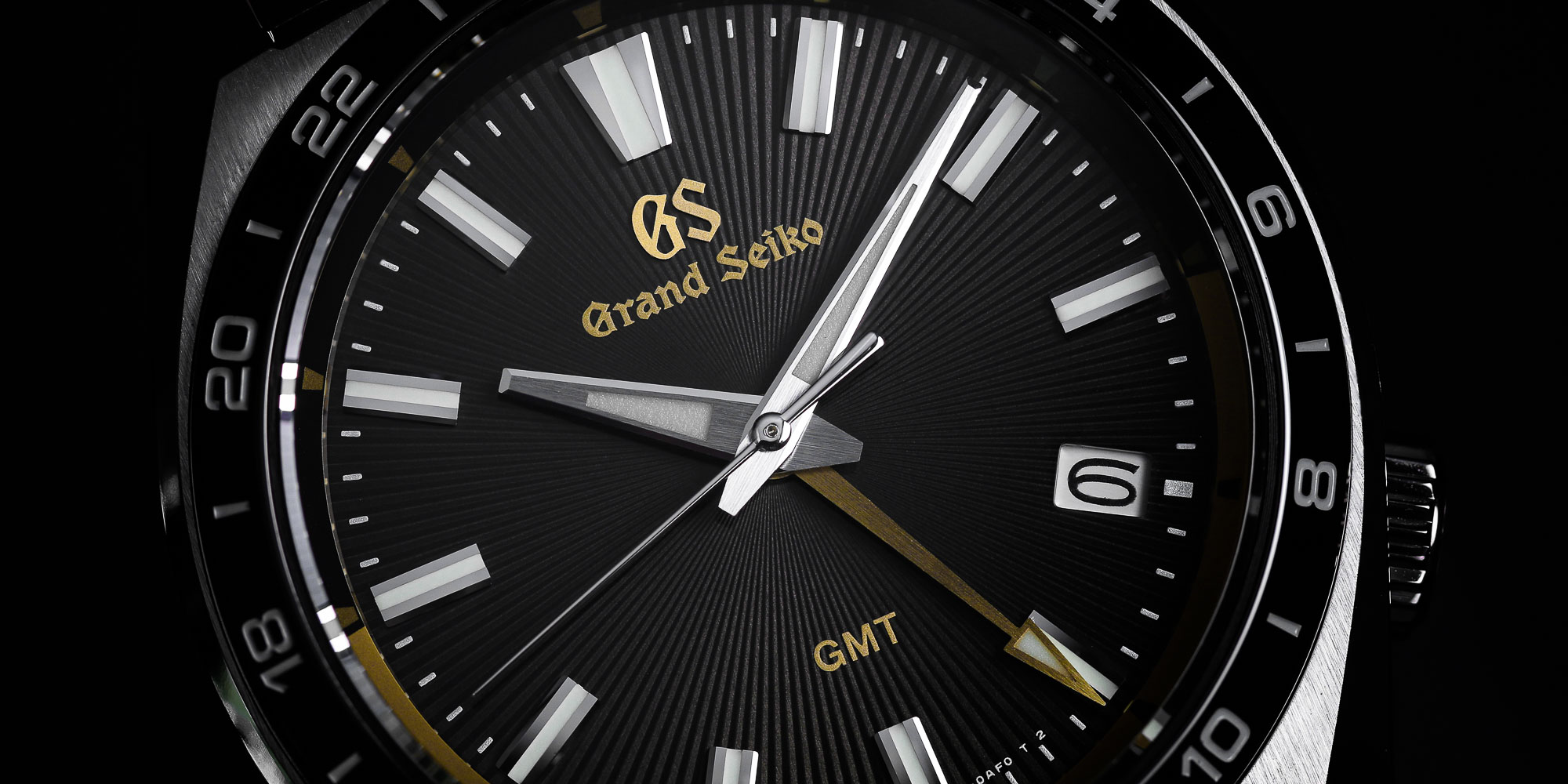 In 2018, Grand Seiko introduced 9F86, the brand’s first quartz GMT movement, along with a stable of sporty watches running on the caliber. Since then, Grand Seiko has steadily built its lineup of quartz GMT watches, and today continues that expansion with three new timepieces under the Sport Collection.

The first two are continuing models SBGN019 and SBGN021, and the third is reference SBGN023, a limited edition of 2,021 pieces marking the 140th anniversary of Seiko’s founding in 1881. The case back of the limited edition carries the Grand Seiko emblem in 18k yellow gold and the watch’s individual serial number. 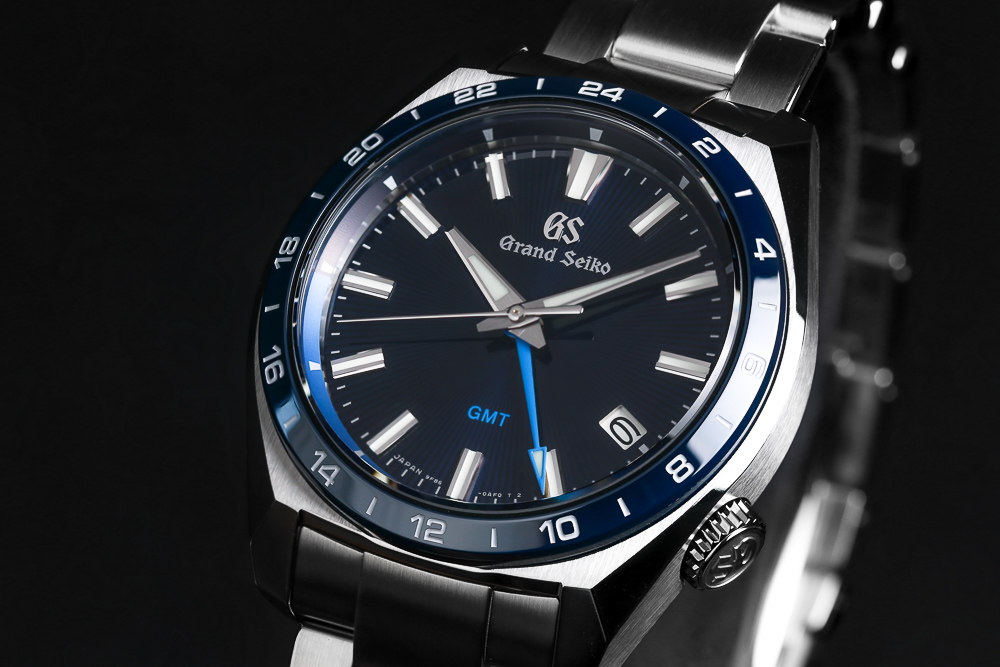 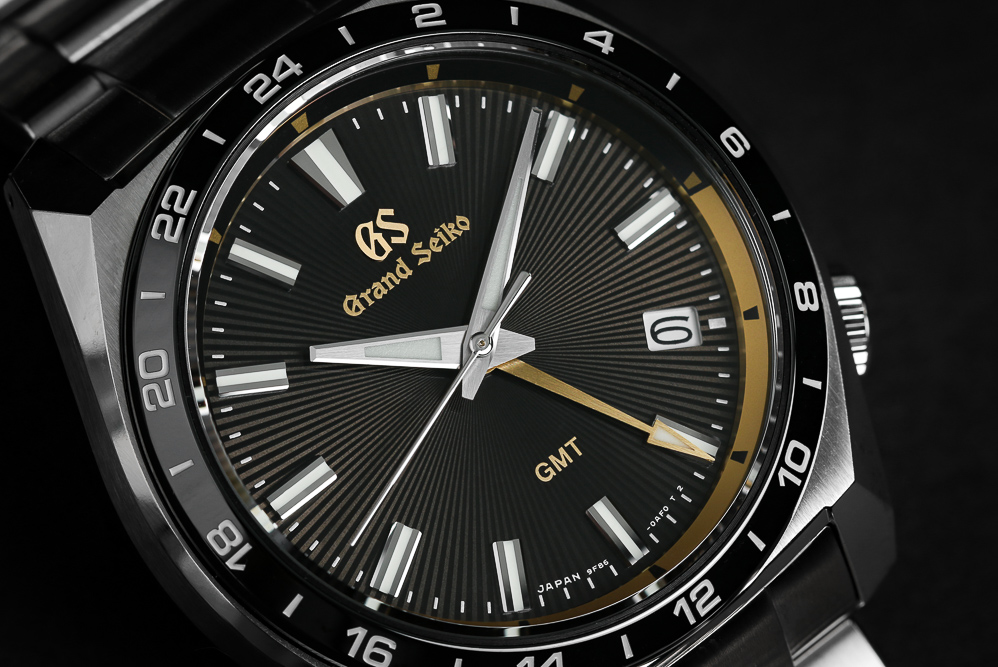 The cases are rated to 20 bar water resistance and feature a magnetic resistance rating of 16,000 A/m (approx. 200 gauss), which is roughly three times the more common 4,800 A/m rating (60 gauss). The top crystal is sapphire with an anti-reflective coating, and it protrudes slightly above the bezel. Flanking the crystal on all three models is a fixed ceramic bezel (with a 24-hour scale) color matched to the dial. 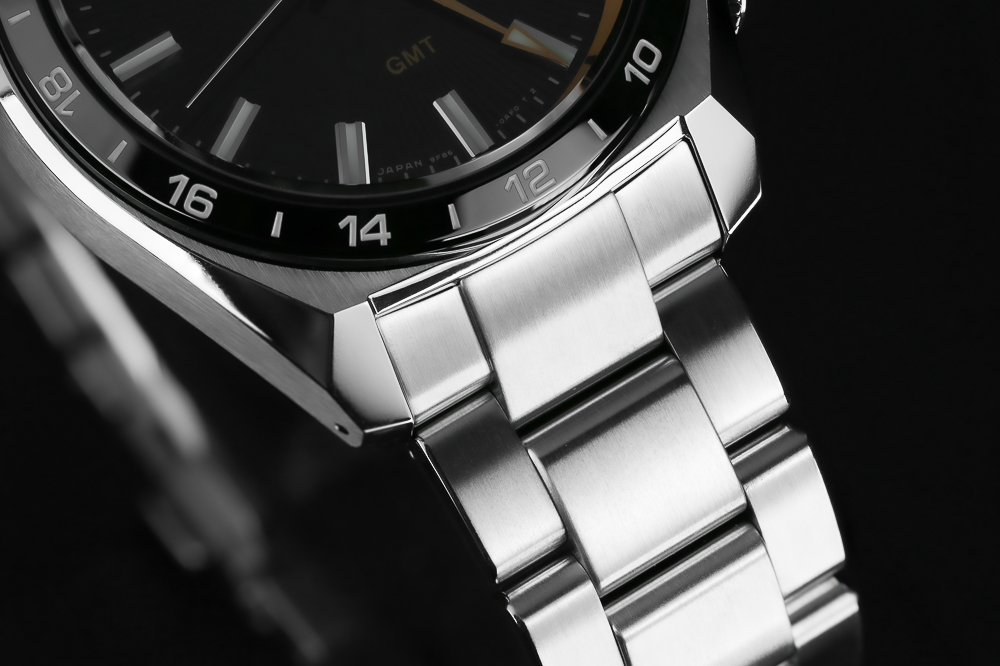 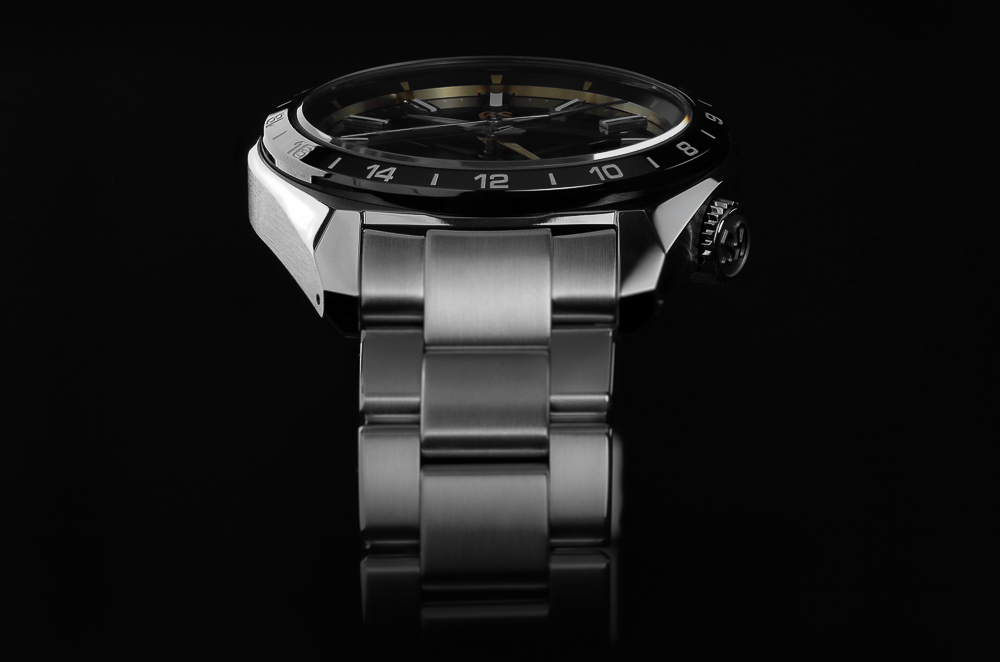 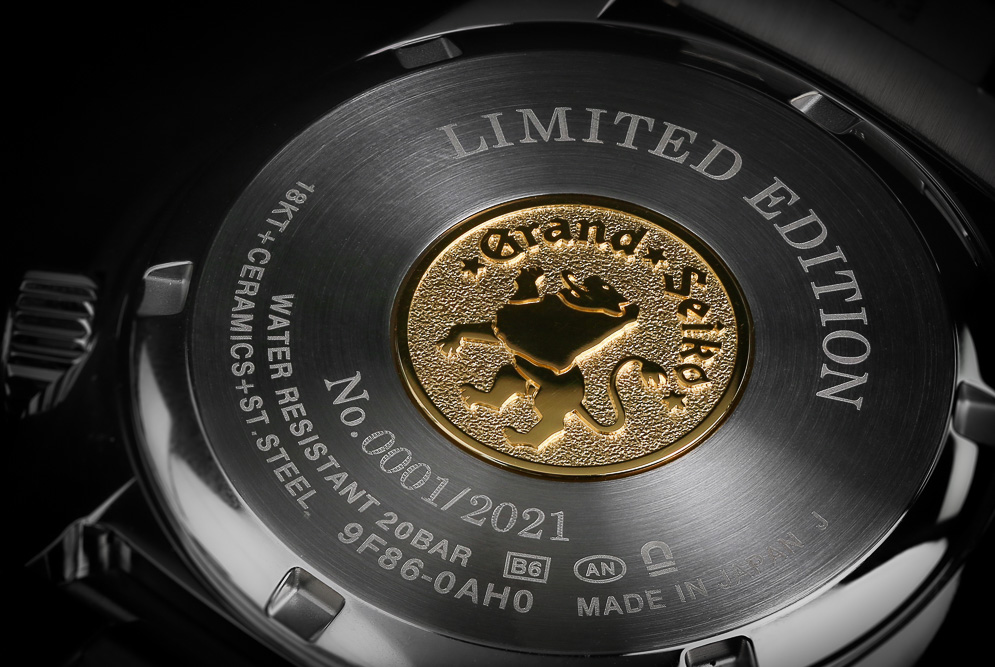 The case back of the limited edition carries the Grand Seiko emblem in 18k yellow gold and the watch’s individual serial number.

Aesthetically, the case has Grand Seiko’s “Tough” design, which was last featured in SBGX341 and SBGX343 (learn more here). The angular form of the Tough case is highly complex, and that complexity is most evident around the mid-case and, specifically, the lugs. Note the multi-faceted geometry of the lugs and the intricate level of finishing applied to them, with Zaratsu-polished surfaces contrasting against the hairline-finished case-sides and top (right where the ceramic bezel

sits). Certainly, the overall look pulls from Grand Seiko’s design philosophy, otherwise known as the “Grammar of Design,” but inspiration can also be attributed to some of the other recent designs found in Grand Seiko’s Sport Collection, among them SBGH255. Altogether, it’s a beautiful case, and one that keeps wearability right at the forefront. With its manageable size and crown at four o’clock, these are very comfortable watches on the wrist. 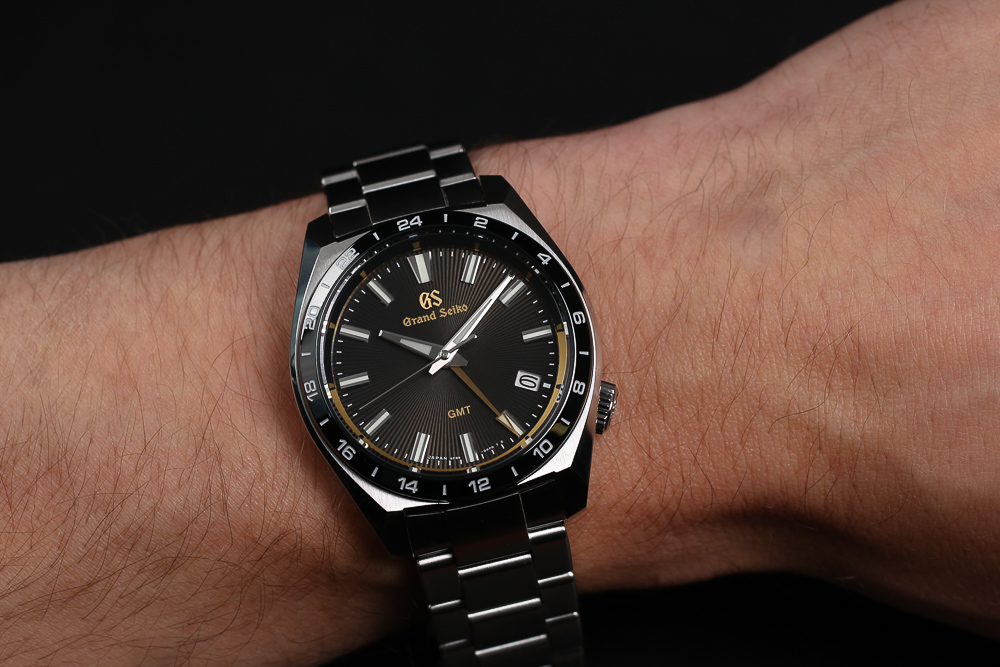 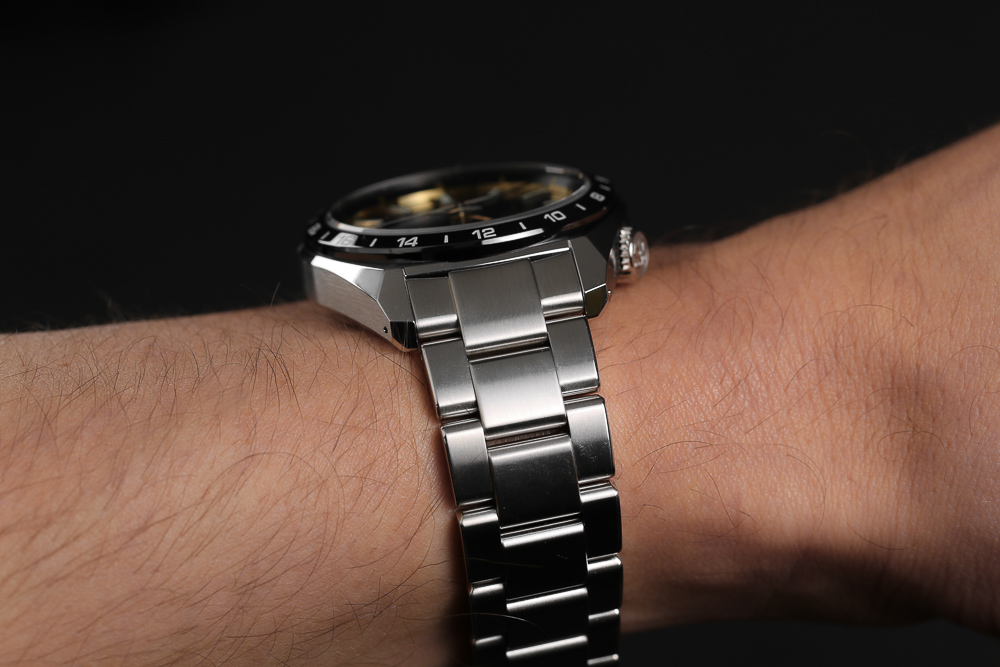 The dials feature bold, highly legible elements, from the contrasting color details and date window at four o’clock, to the sizeable indexes, hands, and their respective use of Lumibrite—a long-lasting, proprietary luminous paint that ensures nighttime visibility. 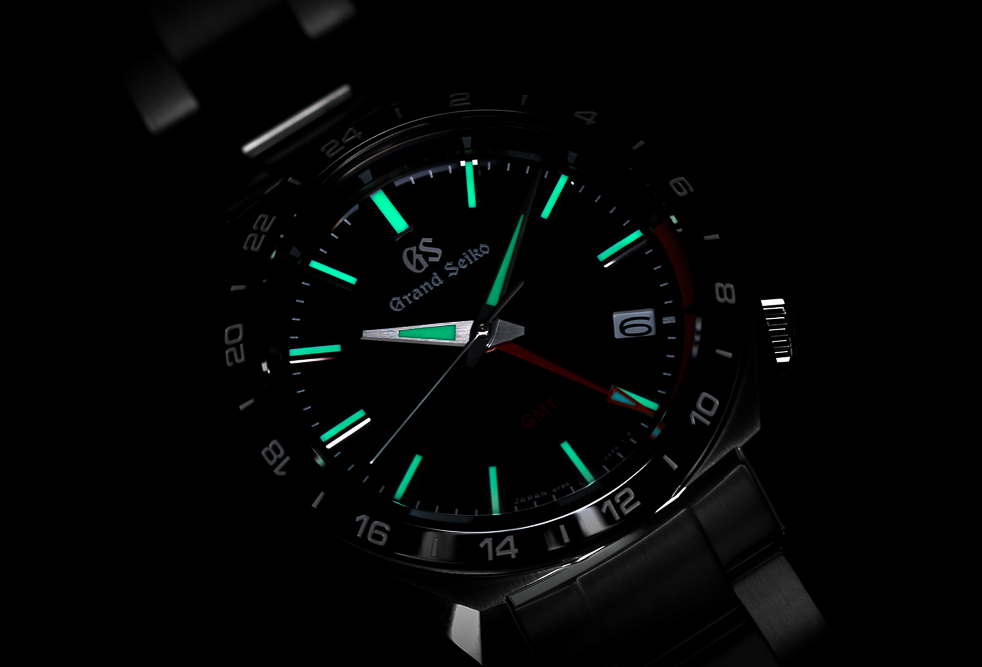 Two colors of Lumibrite are used here: green for the hour hand, minute hand, and indexes, and blue for the GMT hand.

SBGN019 features a black dial with orange accents, SBGN021 has a blue dial with bright blue accents, and SBGN023 has a black dial with color accents that make the dial appear almost brown. The accent colors are in three places. The first is on the GMT hand, the second is on the “GMT” text on the dial, and the third is along the outer dial ring from three to nine o’clock (or six to eighteen along the bezel), with this color-blocking intended to mark the daytime. It is an effective use of color in both its subtlety and legibility. 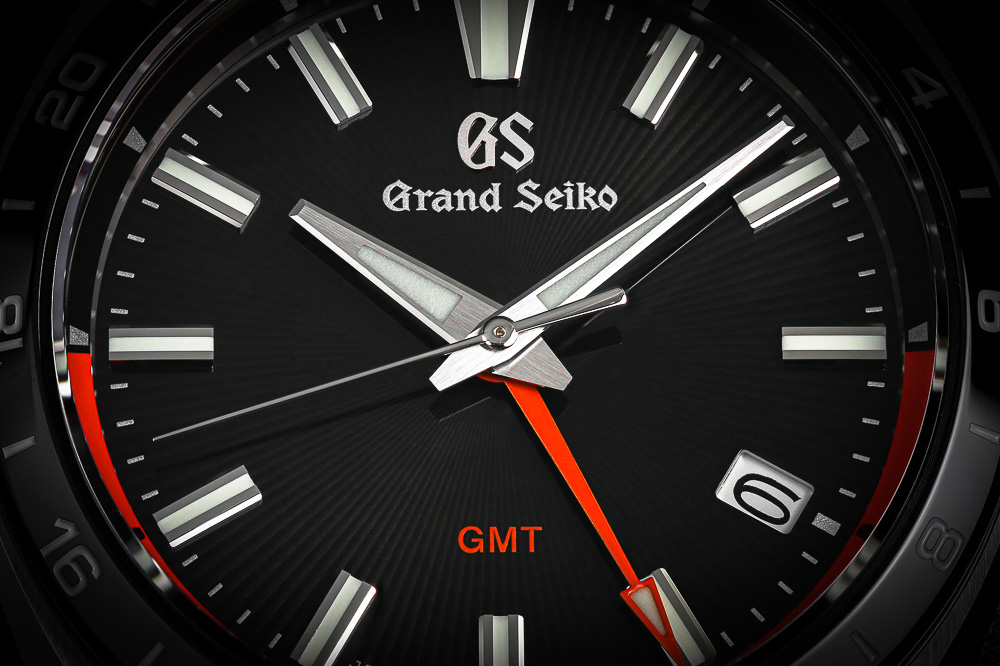 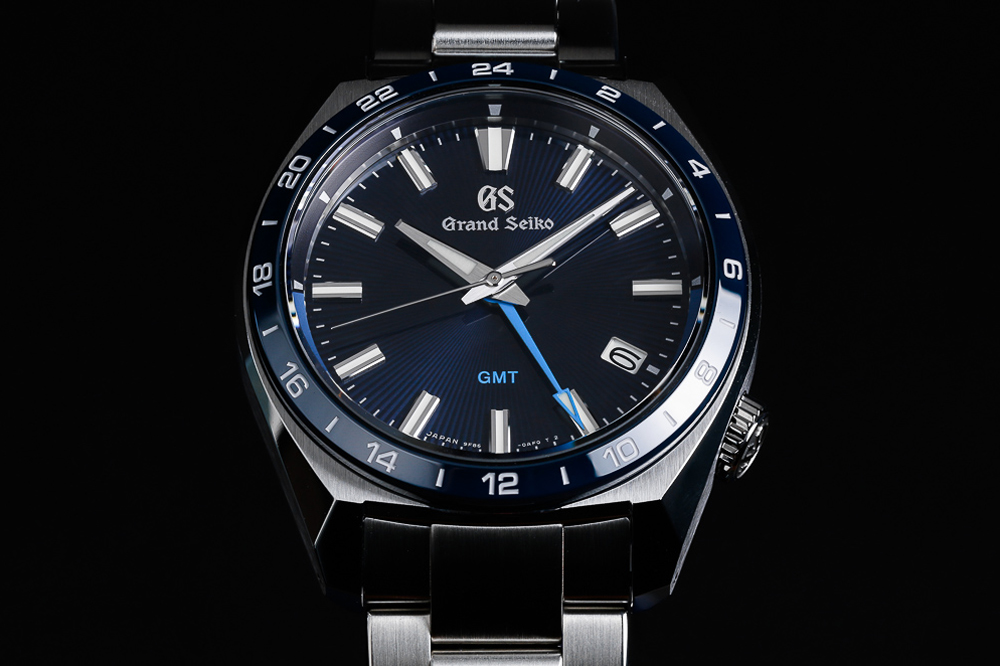 Grand Seiko makes its quartz GMT watches as user-friendly and hassle-free as their mechanical counterparts. As is the case with all of Grand Seiko GMT watches, the 9F86 movement powering this new collection gives these watches true GMT functionality. This means that the local hour hand is independently adjustable while the GMT hand remains fixed to “home” time. The benefit of this sort of functionality is that upon arriving to a new locale in a different time zone, the wearer can quickly jump the hour hand to the appropriate hour without having to reset the watch. For example, if one were traveling from New York to California, they would simply jump the hour hand back three positions upon arrival to account for the three-hour time difference. With a movement as accurate as those in Grand Seiko’s 9F series (+/-10 seconds per year annual deviation), not having to reset the watch is a big deal, and it speaks to Grand Seiko’s commitment to precision. 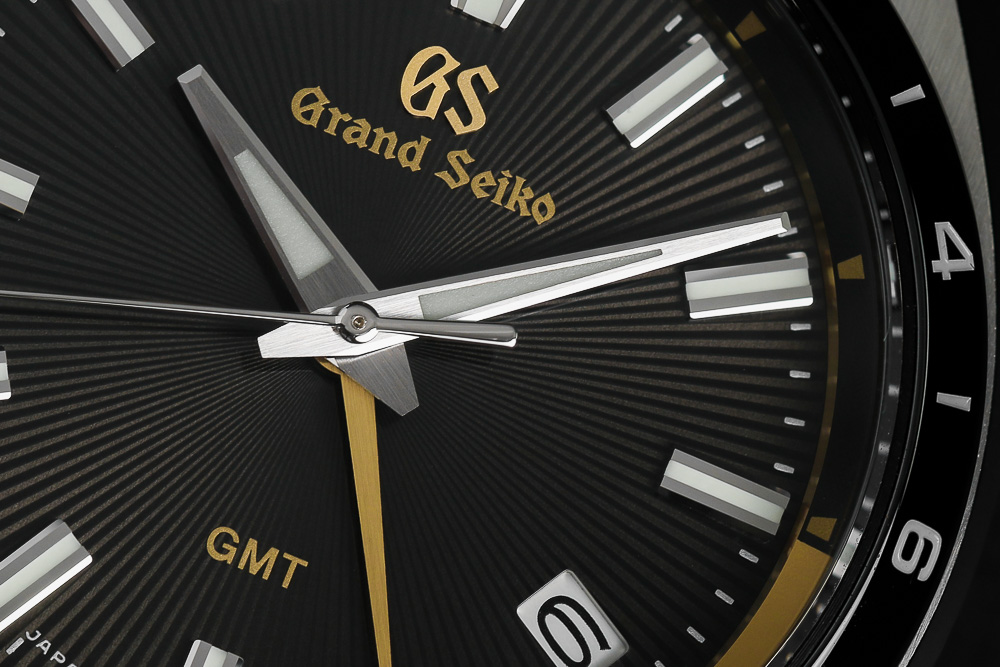 The golden tones of the limited edition model evoke the rays of the sun at dawn, expressing a strong will to face new challenges. 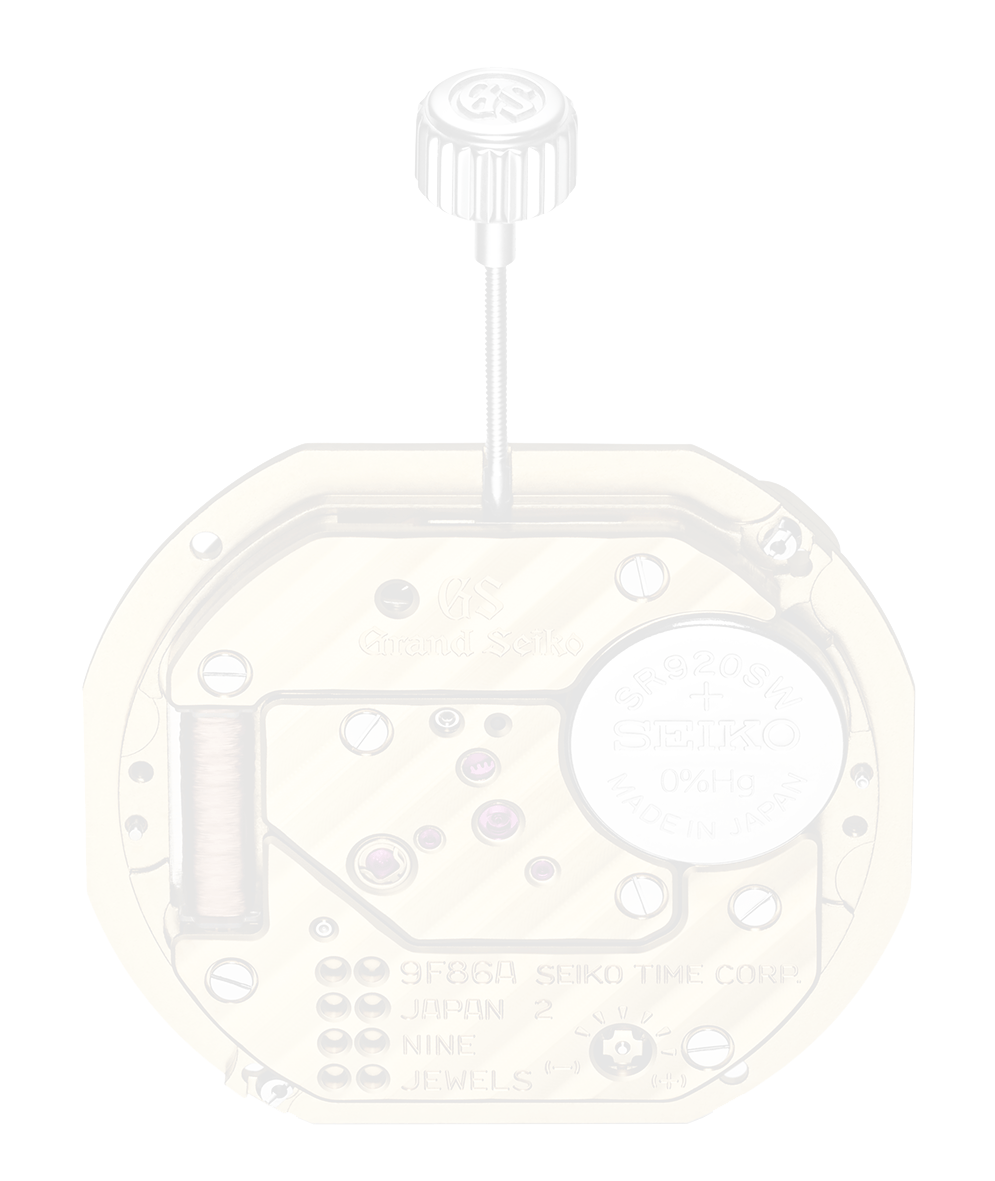 When the first 9F movement came into existence in 1993, it was created to be the quartz that surpasses all other quartz. This new series combined the aforementioned accuracy rating of +/-10 seconds a year with the high torque of a mechanical movement, all the while maintaining a low level of energy consumption. This meant that the movement’s new Twin Pulse Control Motor would allow for the use of Grand Seiko’s large heavy hands. Additionally, a Backlash Auto-Adjust Mechanism eliminated any wobble of the second hand as it advanced across the dial, and an aged and highly-stable quartz crystal was paired with an in-house-developed, ultra-low-power IC programmed to specifically respond to that crystal’s reaction to temperature changes, guaranteeing the highest level of performance. There was also an Instant Date Change Mechanism, never before seen in a quartz

movement. This instant date mechanism was one of the features that posed a challenge when Grand Seiko first set out to create the 9F GMT, and it wasn’t until 25 years later that Grand Seiko engineers were able to resolve it.

Longevity was also built into these movements. Featuring nearly-full metal construction with thick bridges and plates, all 9F calibers are designed to be taken apart and fixed should there ever be an issue, and not simply discarded as is the case with many other quartz movements. Furthermore, a protective shield construction allows for the retention of lubricant thanks to the Diafix spring and cap jewel system, and it also prevents dust and other contaminants from entering the gear train, an especially useful feature to have during battery changes. 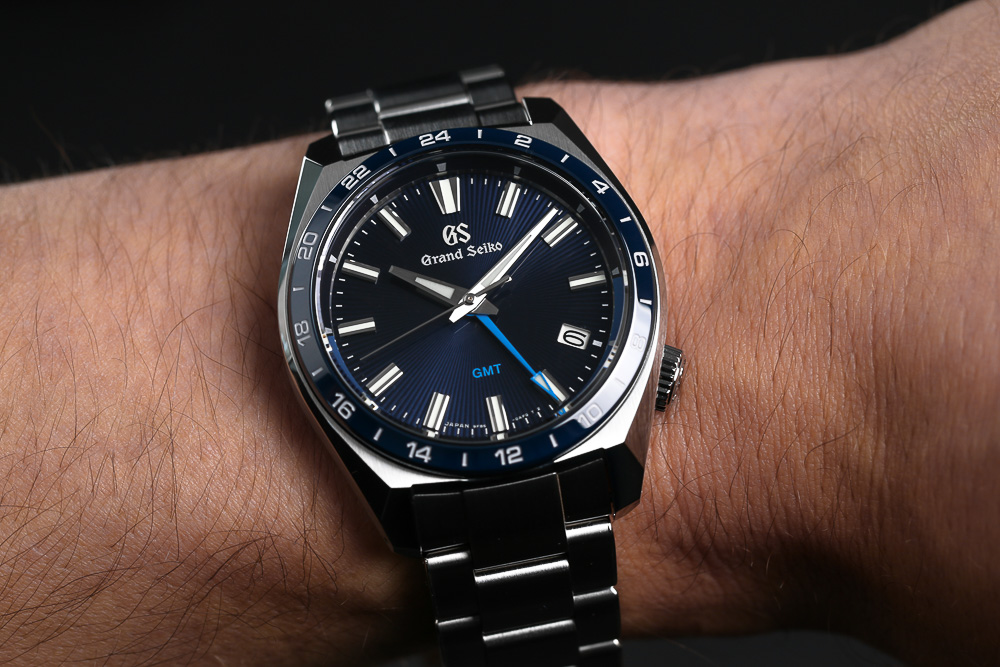 All three timepieces come mounted on a classic three-piece-link steel bracelet with a signed three-fold clasp. The end links fit flush against the case, giving the whole package an almost integrated appearance that feels right at home on a versatile sport watch.

With their sporty design and tough-as-nails movement, these new references are a great choice for daily wear no matter the situation.

(Please note that the timepieces featured here are production samples and not the final product.) 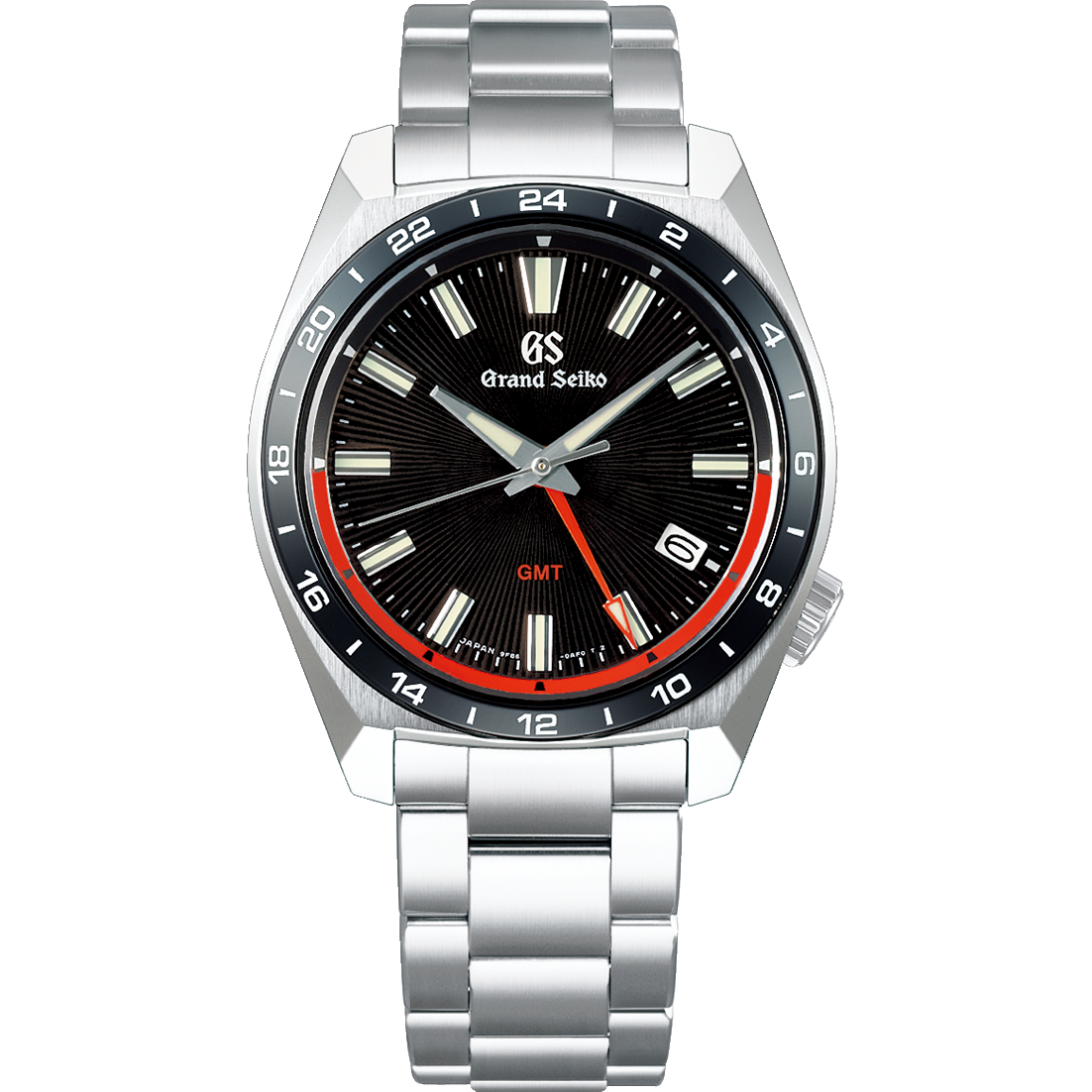 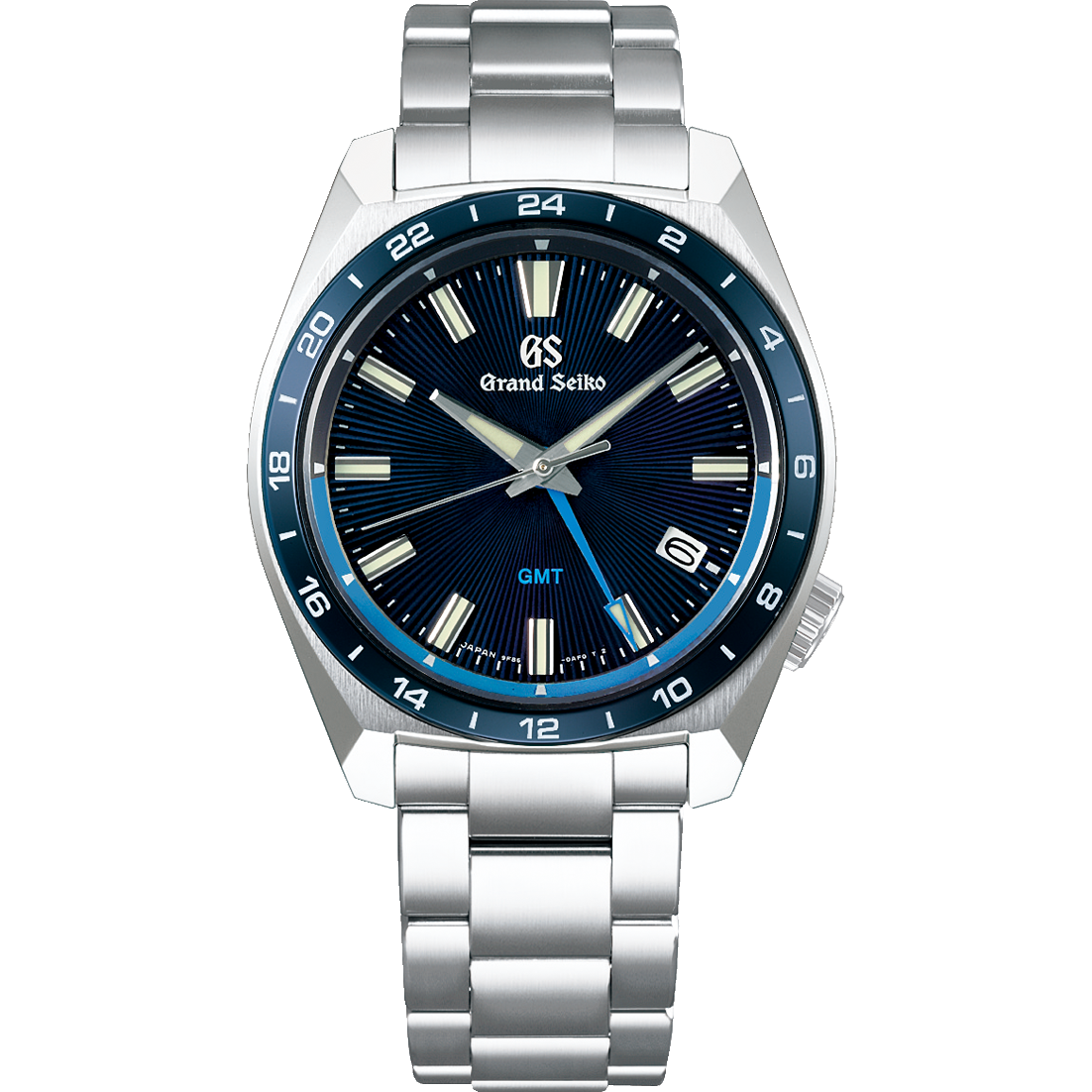 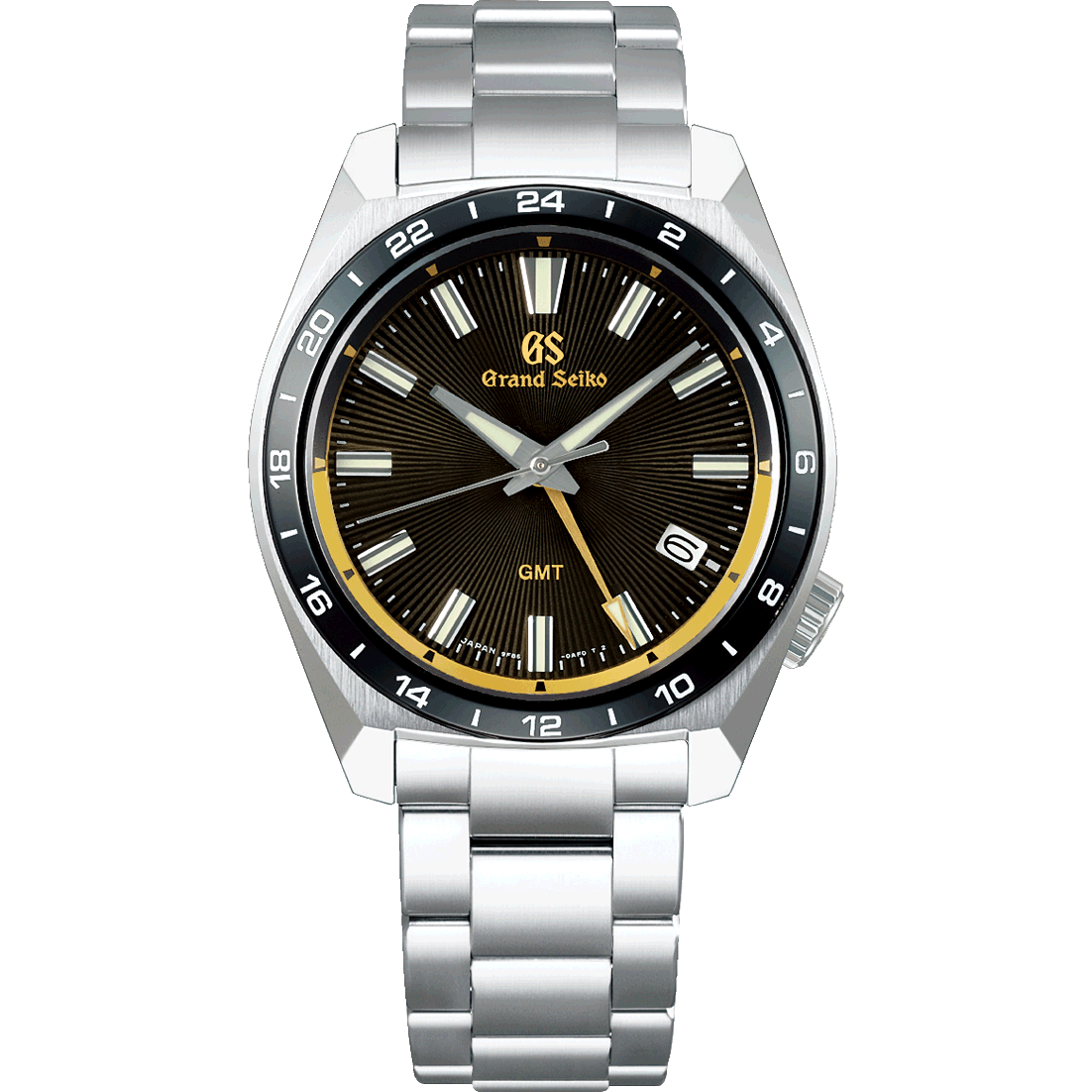 What is the Grand Seiko Evolution 9 Style?
Read Article